A Measure of Quantity, Not Quality

A CRM is a media measure that values the cost-per-mille (or cost-per-thousand impressions) for an ad campaign buy.

It’s a legacy from radio and TV advertising. Networks estimated the size of their audiences so they could calculate how many times ads were exposed to listeners and viewers (impressions) and place a dollar value on that number (CPMs).

The challenge was they had no way to determine the quality of impressions. Even today, when a network or station runs a TV commercial, no one really knows for certain how many people actually watch it, or whether they are viewers that the advertiser really wants to target. Still, CPMs remain the primary units for selling and buying TV and radio.

As digital media have evolved (initially, online display but more recently, video), they have followed in the footsteps of traditional media in using impressions and CPMs for selling ads. Most brands and agencies today buy display and video ads on a CPM basis.

However, ad technology companies have been steadily innovating more precise ways to measure the size and character of ad audiences, as well as their engagement with ads. And this insight has prompted a new focus on a much more valuable metric—the view. 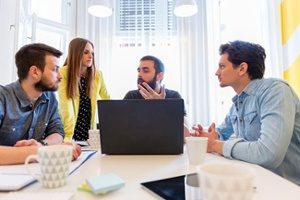 The good news for video advertisers is that, in time, most of the digital media market will trade on the true value of a video campaign: how many people actually watch your entire ad—and who they are, specifically.

Viewability remains the hot-hot-hot button issue of the day as more brands and agency media planners realize just how few of the video ad CPMs they pay for are ever seen.

Many video ad publishers and networks built their systems on legacy display ad technology and in many cases, it can’t distinguish between user-initiated and forced-view video ads, tagging both as impressions.

How bad is it? Integral Ad Science recently reported that, viewers never see 60% of the video ads that brands and agency media planners purchase outside of YouTube.1

And despite industry commitment to address this situation, the past 18 months has produced only a 1% improvement in viewability.

A Clear and Better Alternative

In December, 2010, YouTube introduced its skipable ad format called TrueView, along with a different value model than CPMs.

The new media measure called “CPV” values the cost-per-view for a skipable video ad campaign. This model charges advertisers only when a viewer chooses to watch a full ad, or 30 seconds, whichever is shorter.

Writing in Ad Age at the time, Baljeet Singh explained why YouTube defined TrueView this way:

“Viewer intention to watch an ad is widely seen as a proxy for whether a brand message is being delivered and consumed.”2

Indeed, YouTube ad revenue has climbed steadily since then, surpassing cable networks like AMC and ESPN ad revenues, and approaching the traditional broadcast networks like NBC and CBS.

The Full Value of the View

Buying media on a cost-per-view basis produces tremendous value for brand stewards both in terms of engagement and bang for the buck.

For example, a platform like Sightly’s TargetView™ optimizes YouTube TrueView campaigns to maximize views at the most cost effective CPV. The major benefits of this approach are:

As advertisers and media planners learn more about high-value CPV-based video ads like YouTube’s TrueView skipable format, the day isn’t far off when CPMs are laid to rest.